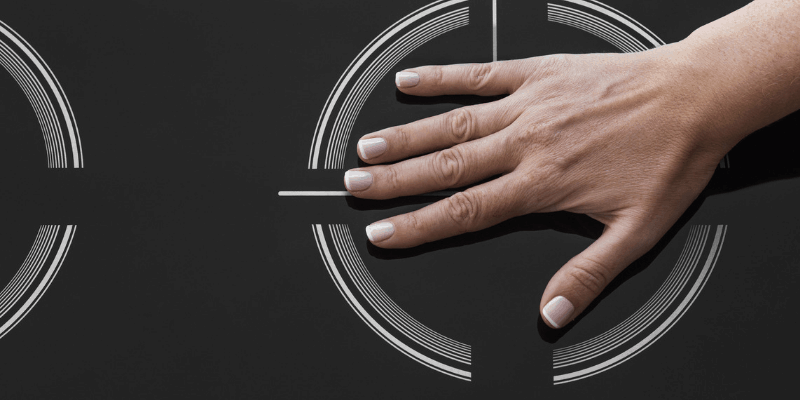 Induction cooking is the most superior technology of cooktops present today. It is efficient and cooks with speed saving energy and time.

It uses very little power, responds immediately to settings and does not pollute the environment. Only the cooking vessels get heated up due to electromagnetic Induction.

How do Induction Cooktops work?

An alternating current passes through the wire into the coil beneath the cooktop surface creating a magnetic field. Only the materials of the cookware which are magnetically conductive and ferromagnetic work on Induction.

This magnetic current causes a resistive electric current to flow through the cookware thereby creating heat and cooking food. So the heat is created within the cooking vessel and rest of the area remains cool.

An impressive fact in Induction is that heat that is created remains in the cookware and does not leach into the atmosphere. This keeps the kitchen and cooktop surroundings cool.

Stainless steel and cast iron work best. Copper glass and aluminum do not work on induction.

Another option to make all the cookware ferromagnetic is to place converters behind the base of the cooking vessel between the cookware and the cooktop.

It boils quickly at a faster pace than any cooktop. It also simmers quite quickly adapting to change in temperatures within seconds of pressing the button.

New inductions have touch sensors which can sense the cookware and adjust heat energy output according to the size of the pan. They switch off if an empty vessel is kept by mistake on the induction.

There is no risk of burning of food due to lack of flame. There is no gas leakage, fume inhalation, etc.

As it has smart sensors that switch off automatically so there is no danger of leaving the cooktop on by accident. The vessels remain clean on the base and sides unlike when used in gas cooktops or electric cooktops.

Disabled people and children can work near the cool surface cooktop without being harmed.

Spills are easy to clean and do not get baked as the surface remains cool. It can be cleaned easily using a damp cloth followed by a dry cloth. Hard water stains can be cleaned with vinegar.

For other parts of induction which are not glass like stainless steel, gently wiping with soapy water and cloth is enough. For dirtier parts, scrapper can be used gently at 45-degree angle. Some specialized creams may be required when Induction gets very dirty.

It only requires an electrical socket of 220-240V.

Since the temperature can change and be controlled within seconds there is less risk of food being burnt, spilled, vessel getting damaged, etc.

If an empty vessel is kept it switches off immediately. If the cookware gets too hot, it beeps and switches the fan on. At times it shuts down.

There is a control dial for controlling more than one element in case of a hurry or emergency. There is a pause button to stop the course midway in case of spills, leaks or any other work which requires one to break from cooking for a while. All the buttons get locked when the pause button is pressed. After cleaning you can resume cooking.

There is a child safety lock button which makes it very safe for cooking near children. The display setting will remain active and locked. All the features and functions will be locked as well.

For reasons of safety, only the power on button will be usable. This will avoid bigger mishappenings in case the lock switch gets jammed or stuck due to error.

It is easy to install and can be fitted higher or lower according to convenience. There are portable inductions as well which can be safely used anywhere in the house. It requires less space. When fixed it does not need more than 2-inch thickness vertically below the countertop.

Some inductions have anti-magnetic walls that ensure safety for users from magnetic radiations.

There is an automatic pan detection feature in most inductions in which the cooktop shuts down 60 seconds after cookware is removed.

Some induction cooktops have safety sensors which monitor the temperature at the bottom of the cookware. It auto adjusts power output to avoid damage to cookware and cooktop.

Nowadays, you can also get induction cooktops that are wifi or smart device controlled. With the help of which temperature and time can be adjusted and controlled.

Almost all inductions have a safety cut off feature. In this, if the cooking zone is switched on for an extended period of time without the temperature being altered, it will cut off or switch off automatically.

The period of time required to prompt the safety cut off depends on the heat settings of the cooktop at that time. The lower the setting, the longer the cooking zone will remain on. Some cooktops have the added benefit of remaining power on low sim for many hours.

On the other hand, cooktops using the maximum highest setting will automatically switch off after one and a half hours. If your cooking habit requires continuous cooking for a long time, it is a good idea to opt for a cooktop with longer safety cut off periods.

There are many other safety features in the induction cooktop like auto heat up, booster, overflowing control, residual heat light, LED flames, etc.

There is a Study done which show the Electromagnetic field exposure also known as EMF exposure exceeds the maximum exposure levels when a person stands close to the induction.

These exposure limits even exceed the occupational limits as well. They do not comply with the basic restrictions defined by the international commission on non-ionizing radiation protection (ICNIRP). The above findings were found in the majority of induction cooktops.

Compliance was found to ICNIRP at the distance specified by IEC (international electrotechnical commission). This distance is 1 foot. According to Power Watch, this distance is the reason why induction passed the safety test.

While some people prefer standing close to the stove and cooking, remember to keep at least a foot away from induction while cooking.

Another study was done by the Swiss government on the induction method of cooking. They too found that inductions units were not complying with the ICNIRP guidelines unless they were used in a specific cooking method.

The method required standing 30cms away and using a large cooking vessel which is centered on the cooking zone. This will prevent stray radiations. It is a good idea to place the cookware first and then switch on the induction.

Now since this is a health matter and a cause of concern let us delve into details of what exactly is EMF and how is it linked with Induction cooking.

What are electromagnetic fields?

Electric and magnetic fields are invisible areas of energy (they are also called radiation) that is produced by electricity. Electricity, as we know, is a movement of current or electrons through a wire.

A magnetic field results from the flow of current through the wire or any electrical device. It increases in strength as the current increases. The strength of the magnetic field decreases quickly with increasing distance from its source. Magnetic fields are measured in microteslas.

Now there are two main categories of EMFs.

High-frequency EMFs which include x rays and gamma rays and ultraviolet rays. These are present in the ionizing part of the electromagnetic spectrum and can penetrate the human body and damage DNA and cells directly.

Low to mid-frequency EMFs which include magnetic fields from electrical power lines and appliances, radio waves, microwaves, etc. these are in the non-ionising radiation part of the electromagnetic spectrum.

Which EMFs are harmful?

Frequencies are the number of waves in a given distance. It is measured in Hertz. Wavelength is the distance between the waves and is measured in nanometers.

Just as a rope that is swung harder has more energy in it, so do wavelengths with higher frequencies.

So the waves at the lower end of the electromagnetic spectrum are very long and have low frequencies. At the other end of the spectrum, there are waves of higher frequencies. These are UV rays, x rays, and gamma rays.

That means if you are near a piece of equipment that is generating a lot of power and you start to feel some symptoms like dizzy or headaches, all one has to do is move away from it and the symptoms will stop and there will be no cumulative effect or permanent effect on the body.

Although there is no conclusive proof that induction cooktop emits radiation that can harm you, it’s advisable to be cognizant of this fact and keep some distance. Also, if you use a pacemaker, it’s better to avoid induction cooking the magnetic field may interfere with the pacemaker.

Induction cooktops generate non-ionizing radiation. they are not harmful and stepping 30 cms (1 foot) away from it and working will protect you against EMFs. Any stray EMFs can be countered by using bigger size cookware or cookware with the same size of the induction base and switching on the induction cooktop after placing the cookware.

Avoid using metal spoons while cooking on induction as that may lead to the current flowing through your body.

According to a study, Induction cooking is not safe for patients on pacemakers or similar medical device which is sensitive to electromagnetic induction.

Patients are at risk if the implant is unipolar and left-sided and if they stand close to the cooktop and if the cookware is not concentric with the induction coil. The study also found that patients with unipolar pacemakers are at risk only if they are not dependant on pacemakers.

It is safer, however, to maintain a distance of 50 cms rather than 30cms in case of patients with pacemakers for overprotection.

With antimagnetic shields being built in the new range cooktops and manufacturers developing new technologies to help induction beat the EMF factor, soon safety factor for induction cooking will become 100% and a cause of worry of the past.