But there are some things you need to keep in mind when using cast iron on an induction cooktop.

And in this article, I am going to cover all you need to know about cast iron usage on induction cooktops.

If you’re looking for a cast iron pan that works well with induction stoves, I recommend checking out the T-fal Pre-Seasoned Nonstick Durable Cast Iron Skillet. It has an extra-long handle with an ergonomic grip, side helper handles, and a signature thumb rest for easy handling.

More and more people are becoming aware of it and opening their homes and their hearts to it. The result is excellent food cooked precisely in a short duration of time.

To understand if Cast Iron works on Induction, we must first understand how Induction cooktop works.

The induction cooktop works on the principle of generating heat energy into the cookware with the help of a magnetic field produced in the coil of wire in the cooktop. 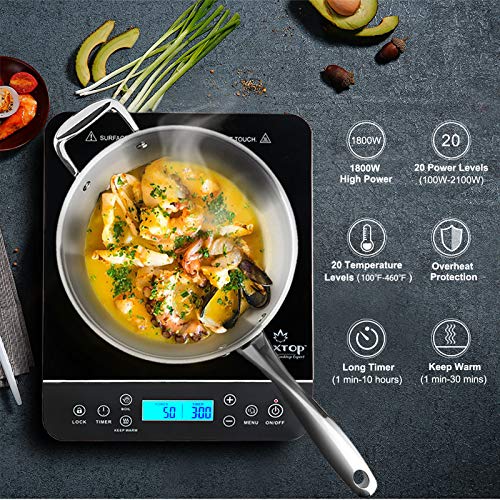 An alternating current is passed through the coil, creating a powerful magnetic field around it and above it.

When cookware is placed on top, the magnetic field penetrates the metal of the pan generating an electric current.

This resistive electric current generates heat inside the cookware and cooks food.

Which Type of Cookware to Use on Induction Cooktops?

An Induction stove requires certain cookware which can be ferromagnetic and magnetically conductive.

The cookware should meet three criteria. It should be:

The moment induction-ready cookware loses contact with the current it cools down.

With induction cooking, the cookware itself becomes the source of heat generation (as the cooktop itself remains cool).

A flat bottom will help to make full contact with the surface of the cooktop. Bottoms that are uneven can vibrate and make a lot of noise on the glass surface.

A method to check whether the material of the cookware is going to work for induction is to use an ordinary refrigerator magnet. If it sticks on the bottom of the cookware, it will work on the Induction cooktop.

Coming back to the question of whether cast iron will work for induction, let us first know the details of cast Iron.

What is Cast Iron?

Cast Iron is a hard, relatively brittle alloy of carbon and iron which can be readily cast into a mold and contains a higher proportion of carbon than steel.

Casting is a manufacturing process in which a liquid material is usually poured into a mold, which contains a hollow cavity of the desired shape.

The liquid material is then allowed to solidify. The solidified part is known as casting/cast, which is ejected or broken out of the mold.

Although cast iron cookware works quite well on induction cooktops, it may scratch the surface of the cooktop.

The bottom of the cast iron cookware is rougher and grittier.

To avoid this you may use porcelain-coated cookware or keep a tissue or paper in between cookware and burner.

It is best to keep a sheet of heat resistance and non-metallic substance under it. A good choice would be parchment paper. Another option is to use a baking mat to protect the glass.

Cast iron has the ability to withstand very high cooking temperatures. Its excellent heat retention makes it ideal for slow and long cooking.

Cast iron needs to be seasoned for use. Seasoning is a process by which animal fat or vegetable fat is applied to the surface of cookware and cooked.

A proper seasoning protects the cookware from rust, provides a non-stick surface, and reduces food interaction with the iron of the pan.

Another option is to use an enameled cast iron. It has a vitreous enamel glaze applied to the surface.

The fusion of the glaze with cast iron protects it against rusting and there is no need for seasoning or applying a thin layer of oil after use or cleaning.

Enameled works best for slow cooking and can be cleaned more thoroughly. However, enameling the cast iron can cause loss of ability to resist sticking of food.

A study done by the American Dietetic Association found that using cast iron for cooking can cause the leaching of dietary iron into the food.

Anemics and those with iron deficiencies may benefit from this effect.

While cast iron can work with induction cooktops, there are a few things you need to keep in mind about cast iron cookware.

Chipping of the coating layer of enamel on cast iron can occur if the pan is dropped, overheated or sudden changes from cold to hot.

Washing or scouring can remove the seasoning on bare cast iron, so these need to be washed carefully.

Either wipe them off and then wash with hot water and brush.

Or wash with mild soap and water and reapply a thin layer of oil or use coarse salt and wipe away with a cloth.

Cast iron is a very slow conductor of heat.

It forms hotspots if heated too quickly. It’s important to minimize hot spots by heating slowly.

However as mentioned before, having excellent heat retention quality, the entire cookware gets heated evenly to high temperatures which includes its iron handles so it’s important to use protection while touching handles.

But since it heats up slowly, the heat travels slowly from the center to the edge of the cookware.

In one study of cast iron on induction cooktops, it was found to heat unevenly due to the induction element being too small.

Does Not Respond To Rapid Heat Changes

Now since cast iron is slow to heat up, it is also slow to cool down.

It retains the same temperatures longer than other materials. It does not respond instantly to sudden changes in temperatures

Cast iron can be used safely on induction with all the special features listed above. You can place the cast iron cookware gently on with parchment paper or baking mat to avoid scratches.

You can also make the bottom of the cast iron cookware smooth.

Since seasoning is a bit deal with cast iron, apply a thin layer of animal fat or vegetable oil after cleaning it.

For acidic food cooking like tomatoes, use enameled cast iron with a porcelain coating. This is because acidic foods eat out the seasoned oil leaving the cast iron bare.

Avoid cooking food that requires a frequent change in temperatures in cast iron as it’s a poor conductor of heat.

You can cook slowly and once it’s heated its amazing benefit is that it can retain high amounts of temperatures within the cookware.

The seasoning in the cast iron cookware radiate infrared radiation which helps in cooking food indirectly.

It also heats by heat conduction whenever the oil touches the food.

You May Also Like the Following Articles about Induction Cooking: