The only difference between a french and dutch oven is that French Oven has an enamel coating while the dutch ovens don’t.

A cast-iron dutch oven is the pot for you if you don’t mind seasoning, and can palate the typical flavors of cast iron.

It is perfect cookware for outdoor cooking on naked flames over the wood or hot coals of the campfire.

If you don’t want anything to do with seasoning and like to cook and dish out in the same cookware, a French oven is the best option for you.

A French oven brings a colorful appeal to your kitchen and is perfect for indoor parties. It is simple to care for and is dishwasher safe.

Allow me to go into the details regarding the Dutch oven and the French oven.

What is a Dutch oven?

Dutch ovens date back to the early 1700s. Abraham Darby, an Englishman, was inspired by the Dutch technique of casting brass in the sand instead of clay.

He made an iron pot using sand molds and that’s how the first Dutch oven came into existence. 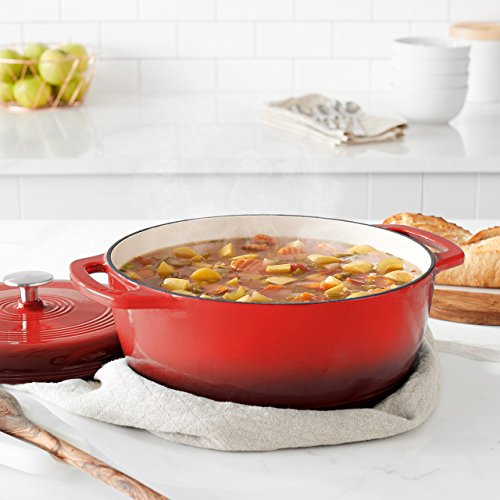 Dutch ovens are made traditionally with cast iron although newer versions made of stainless steel and aluminum are also available in the market.

Dutch ovens usually come with flat bottoms below and a tight-fitting lid above. The dimensions are dependent on the design, the walls are mostly broad and straight.

The cast iron needs to be seasoned from time to time to give you a perfect non-stick surface.

Seasoning also protects the Dutch oven from rusting out.

A Dutch oven is rubbed with a thin layer of oil with the help of tissue paper. The pot is then heated on medium to high flame.

What is a French oven?

A French oven is nothing but a cast iron pot with an enameled surface.

In the 1900s French companies like Le Creuset started coating the surface of cast iron pots with enamel and selling them.

They named the pots “French ovens” to give them a different term. They are also called “cocotte”. 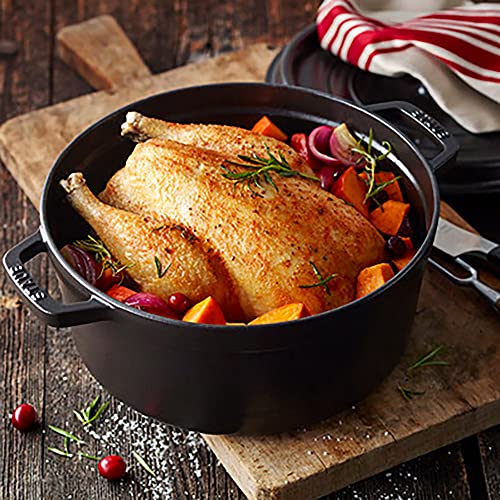 Traditionally round in shape, French ovens can now be found in all sorts of shapes and designs like a heart shape, oval, rectangle, etc.

It is an excellent choice if you entertain regularly. A French oven is bound to catch eyes and can be used over a cooktop and on the serving table.

Differences Between a Dutch Oven and a French Oven

Let us move forward with the difference between a Dutch oven and a French oven.

Both are great conductors of heat and can be used to cook dishes in the same cooking styles.

However, some small differences make them stand apart.

You need to season a cast-iron Dutch oven before and after use whereas a French oven does not need any seasoning.

You must not use hard abrasives to clean the pure cast iron cookware as that can remove the seasoned layer.

If the food particles are stuck deep, boil some water to loosen them up.

You can roughly handle a pure cast iron Dutch oven while cooking but you need to be careful while handling a French oven.

This is because the coating can chip, crack or melt if exposed to sudden and extreme temperatures.

You must never put a French oven on wood or the hot coals of a campfire.

When it comes to cooking options, if you are into camping and love to cook outdoors, a Dutch oven takes away the crown.

You can place a Dutch oven comfortably over any cooktop surface indoors or outdoors.

You can place it over wood, directly into flames, or over the hot coals. It can withstand extremely high temperatures.

A French oven can be safely used in an oven and a dishwasher. But it isn’t resistant to extremely high temperatures.

So you must not use to cook outdoors over the naked wood flame or coal fire.

Do not preheat an empty French oven. It can cause the coating to crack and strip.

If you want to preheat a French oven, add a small amount of oil and place it inside when the oven is cold. This will prevent the cookware from heating up quickly.

Apart from this, you can braise, deep fry, bake, cook stews, soups, and casseroles in both a Dutch oven and a French oven.

Both are used for the same cooking technique and to make the same dish.

Although both a pure cast iron Dutch oven and a French oven are heavy and durable, the durability of French ovens goes down a few notches.

This is because the porcelain enamel coating can crack or chip if handled roughly.

The weight difference is dependant on the size dimensions, capacity, and design.

However, pure cast iron of the same dimensions can be slightly bulky compared to its counterpart French oven.

When it comes to French ovens, due to the beautiful porcelain enamel coating, they are known for adding color and beauty to your kitchen.

You can cook food inside as well as place it directly on the table.

The shining colors of the coating make a style statement of their own accord. They are attractive to look at and hold.

Traditional Dutch ovens are not so aesthetic. However, in modern times, when it comes to appearance, a pure cast iron Dutch oven is available in different designs and shapes.

Efforts have been made to make it look nice in appearance so you can cook as well as serve food directly from it.

Here are some of the frequently asked questions:

How to Season a Cast Iron Dutch Oven?

Despite the minor differences quoted above, you can safely interchange a Dutch oven and a French oven for cooking your food.

A French oven is just another term for an enameled Dutch oven. The term ” French oven” has never really struck in the US.

Both the dutch oven and the french oven are excellent choices for one-pot dishes.

All you have to do is put in your ingredients and the pot does the rest for you. You get to brown your meat on a stovetop and then put it inside the oven for cooking.

If you like beautiful cookware in different shining colors and don’t want to bother about seasoning, choose a French oven.

It is simple to use, is dishwasher safe, and can be used over all stovetops including an oven.

The French ovens give you an option to match the cookware with the aesthetics of the kitchen.

If you love cooking outdoors on naked wood flame or hot coals, a pure cast iron Dutch oven is the pot of your choice.

Cooking in a pure cast iron dutch oven adds rich flavors to the meat and sauces.

Dutch ovens can be slightly bulky but they are sturdy and durable and can last for a lifetime.

Hope I have made the difference clear to you. Pick your choice according to your preference and needs. All the best!