I am always in search of new flavors and different cuisines. When it comes to food, the world is my palate!

I love trying out cuisines from different parts of the world. It is a treasure hunt for me, and I enjoy hunting for healthy and delicious recipes.

My family adores my new findings, and I am so glad that we live in this century where it is easy to reach across borders and appreciate the art of cooking food.

Recently, I came across two healthy recommendations for Japanese cuisine – Hibachi and Teriyaki.

My interest was piqued, and I wanted to find out everything about them.

So if you are also like me and want to know what the difference between hibachi and teriyaki is, this article is for you.

Before proceeding towards the difference between them, let us understand each one briefly.

What Does Hibachi Mean?

Hibachi in Japanese means “hot pot” or a “fire bowl”.

They were initially containers made of ceramic or wood which were used to keep the room warm.

Later, it was used for cooking food. Food was grilled over open flames. The heat source was coals.

Here in the US, Hibachi grills refer to small portable grill tables. These are made of cast iron and are mostly flat or griddle shaped. These containers are often added to furniture tables. The heat source is electric. 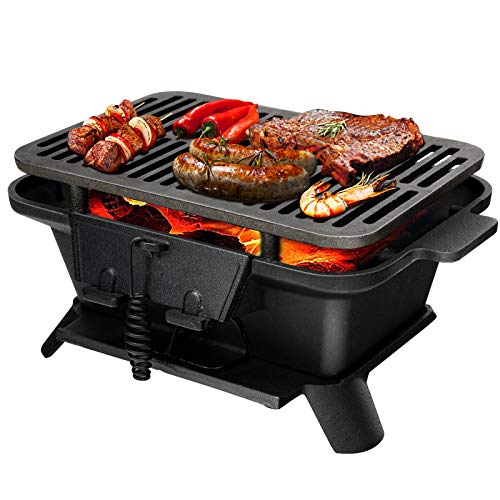 In Japan, these tables are referred to as Shichirin. The Chefs perform live cooking using hibachi grills in front of customers.

What is Hibachi Food?

The term Hibachi is now also used for food prepared on hibachi grills.

It covers all the possible dishes that can be made on hibachi grills, like meat, chicken, vegetables, sandwiches, etc.

Everything needs to be thinly sliced or cut into strips. The results are similar to stir-frying or roasting on the stovetop.

What makes hibachi food different from other foods is the style of cooking. Hibachi food is always cooked at high temperatures. The flat iron surface needs to be smoking hot.

All the food preparations have to be done before heating the grill. Once the grill is preheated, place the food on the hot surface of the flat grill to begin cooking.

Due to the high temperature of the grill, the food cooks quickly.

The most known hibachi dish is Hibachi chicken. It is thinly sliced so it becomes tender quickly on the hot grill. Very few ingredients are used in Hibachi cooking.

The flavor of the Hibachi dish remains mild with more flavors of meat/veggies. For vegetables, it is mostly onions, zucchini, mushrooms, and carrots.

What Does Teriyaki Mean?

Teriyaki is a Japanese food style of cooking a dish. It requires glazing the food with teriyaki sauce. The food can then be grilled on the hibachi grill.

Teriyaki is mainly a style of meat preparation. You can also make vegetables. The main requirement is using a special sauce called Teriyaki sauce.

What is Teriyaki Food?

Teriyaki food is glazed food prepared by marinating food in teriyaki sauce. Teriyaki sauce is also applied to the meat while cooking.

The most common teriyaki foods are chicken, seafood, meat, and duck. You can also make teriyaki vegetables, but they are not very common.

The result is well-cooked and glazed meat.

Teriyaki Vs Hibachi- What Is the Difference?

Let us now proceed toward the difference between Teriyaki and Hibachi. After reading this, you will be a pro at figuring out each one with just a glance.

The Difference in Sauce

The most important difference is the sauce used for making Teriyaki and Hibachi.

The seasoning spices are mostly salt, pepper, ginger, garlic, and sesame. Soya sauce is the only sauce used for dressing ‘Hibachi’ foods.

The wine gives a sweet taste, while soya and seasoning give a salty taste. The result is a glossy finish with a sweet and salty taste. Some Chefs add sugar to negate the salty taste.

The Difference in Food Preparation

The food is cut into thin slices or strips or bite-size pieces for both dishes.

For teriyaki food, the pieces of meat are marinated in teriyaki sauce before cooking.

During cooking, more teriyaki sauce is basted onto the meat to give a glossy appearance. The sauce makes teriyaki food quite moist.

Hibachi foods look drier. The only sauce used is soya sauce along with a few seasonings like ginger, garlic, salt, and pepper.

Soya sauce is used to marinate before cooking. As the food is grilled at high temperatures, some chefs add more soya sauce to the prepared meat to give a little moistness in the end.

The Difference in Food Texture

Hibachi food will look more like stir-fried food. They are usually served with rice and vegetables.

Teriyaki dishes are moist due to the thick glaze of sauce on them. Steamed vegetables are the most common side, along with Teriyaki foods.

This is the traditional texture and serving method. Nowadays, you will find many variations of Teriyaki and Hibachi dishes.

The Difference in Appearance

Japanese food usually stands out in the crowd for its unique preparation and appearance. Both Teriyaki and Hibachi are quite common in the US.

Although both have soya sauce in them, Teriyaki and Hibachi can be understood with just a glance.

If the meat has a glossy appearance due to lots of sauce and is served with steamed vegetables, it is Teriyaki.

If the meat is slightly dry and looks roasted or stir-fried and is served with rice/ pasta and vegetables, it is Hibachi.

The Difference in Taste

A Teriyaki dish will have strong flavors. It could be sweet or sweet-salty.

Due to the strong taste of the teriyaki sauce, the sides served are mostly bland in taste, like steamed vegetables.

A Hibachi dish will have more flavors of original meat/vegetables.

This is because only soya sauce, ginger, and garlic are used to dress the Hibachi dish. It is lightly flavored and tastes well with grilled vegetables, rice/pasta.

The Difference in Nutritional Value

Hibachi is more nutritious and healthier compared to Teriyaki. This is because very few ingredients are used to cook Hibachi dishes.

There is also added nutritional value of vegetables that are served as sides.

Are Teriyaki and Hibachi Similar?

In terms of Family, yes Teriyaki and Hibachi are both Japanese foods.

While Hibachi refers to the style of food cooking, it is also used for dishes cooked on Hibachi grills.

Teriyaki, on the other hand, means food that is made using teriyaki sauce. The food mostly cooked in teriyaki sauce is meat and seafood. The result is glossy meat.

So now you know the difference between Teriyaki and Hibachi in detail. Teriyaki is a food preparation using teriyaki sauce. Hibachi refers to portable grills, as well as the food made on the hibachi grill.

Hibachi foods are usually made with soya sauce, ginger, and garlic.  Teriyaki foods will have lots of teriyaki sauce along with soya and garlic.

Hibachi food will have stir-fried or roasted meat, vegetables, and rice/pasta. It will be mild in flavor but high in nutritional value.

Teriyaki food will have a lot of sauce, appear glazed, and have steamed vegetables as sides.

It has strong flavors and more calories due to the presence of sugar and sodium in the sauce.

Both dishes are tasty works of art. I hope you try both dishes the next time you visit a Japanese restaurant. Bon Apetit!